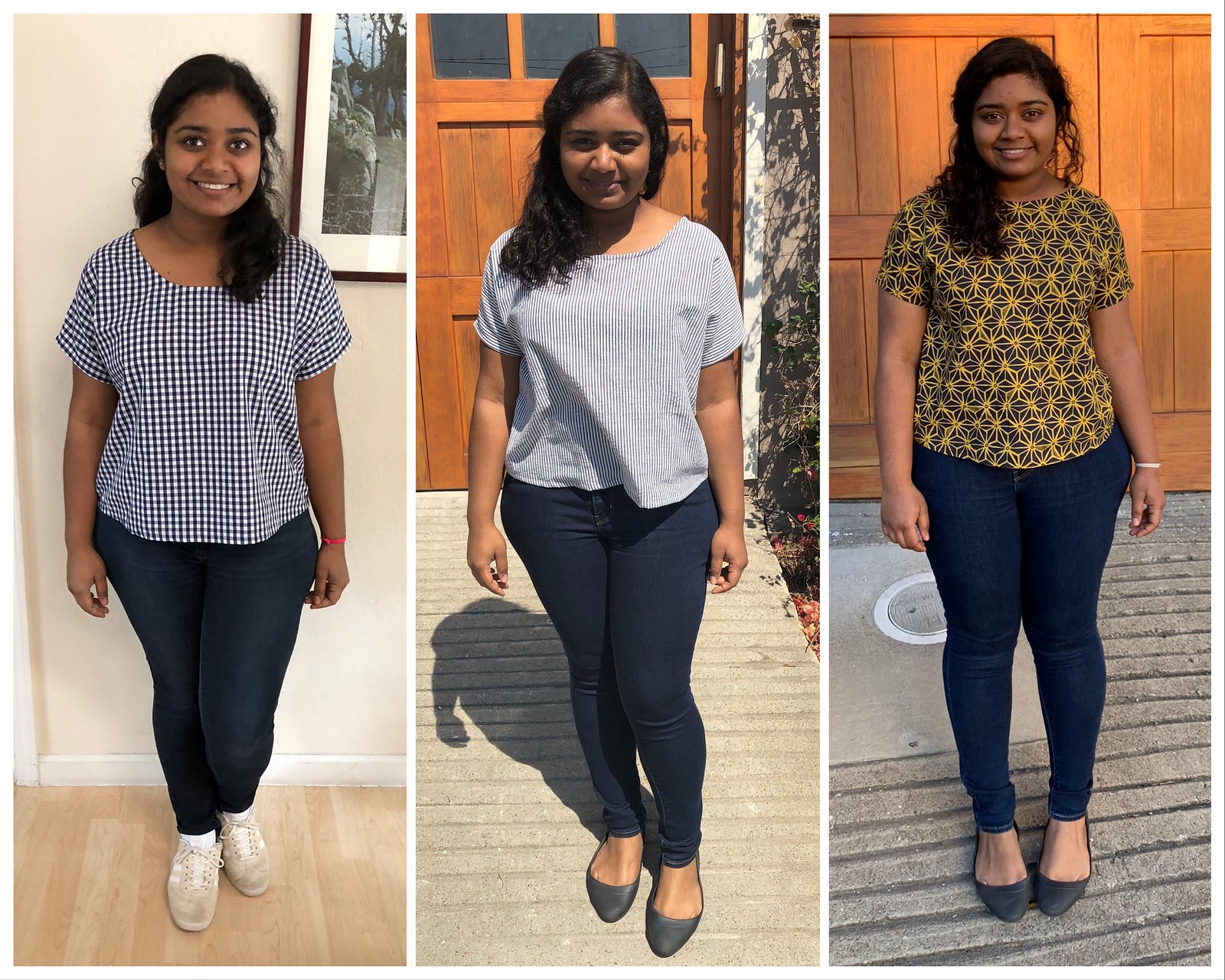 When I picked up sewing this past summer, I started simple. I decided to make Shirt No. 1 from 100 Acts of Sewing. I had a free CreativeBug trial, and I enrolled in pattern maker Sonya Philips’s class, which gave me a printable pattern and a step-by-step video tutorial.

It’s a simple, drapey, boxy-minimalist top. You can make it in cute cotton prints, like I did, or you can make more sophisticated versions in linen and silk. I’ve made three versions of this shirt so far. Each time I make it, I work a little faster, and my stitches are a little neater. 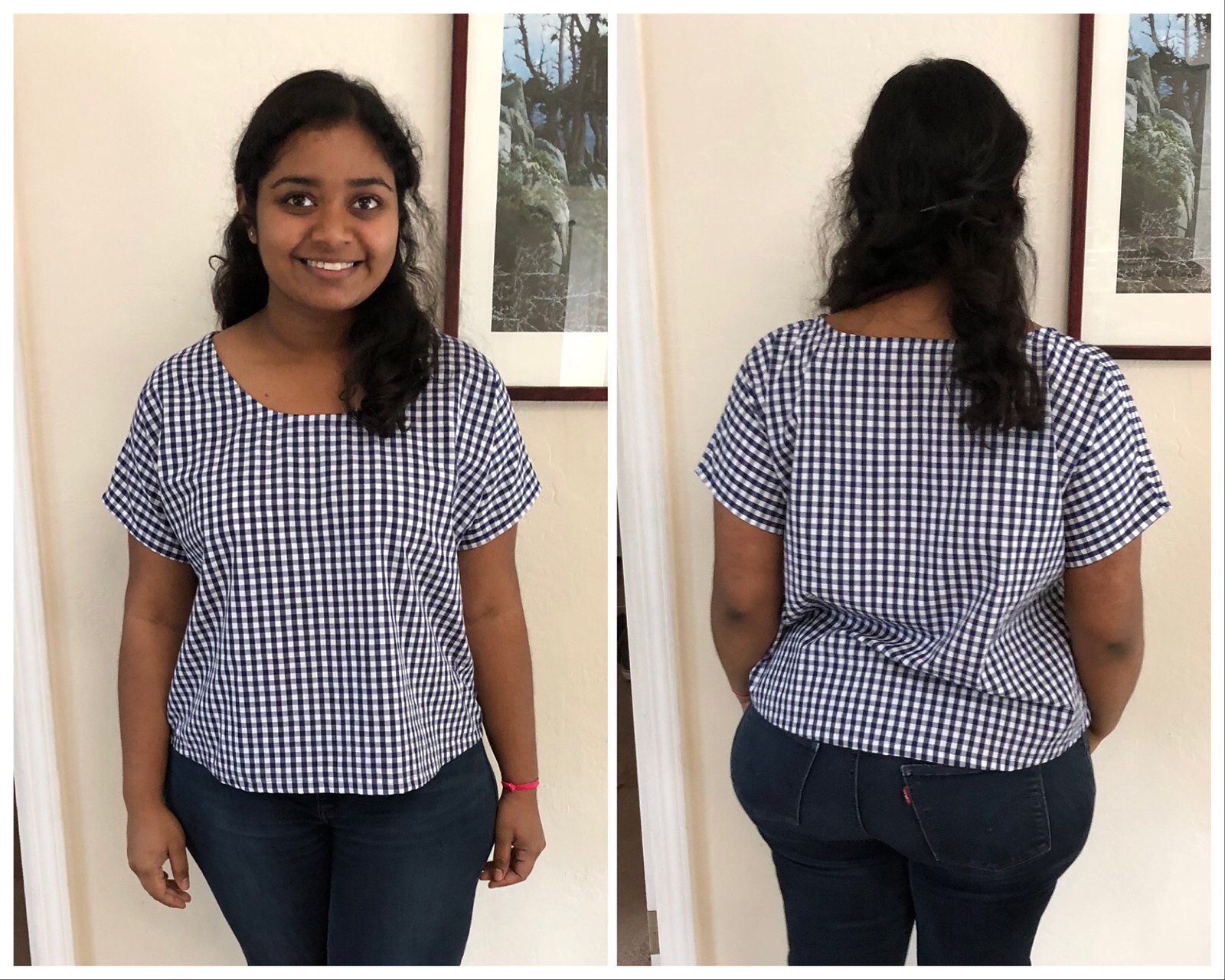 This took me something like 5 or 6 hours to complete. I was happy with how the finished top looked. I liked the cropped length and thought it looked cute and cheerful for days at the beach: 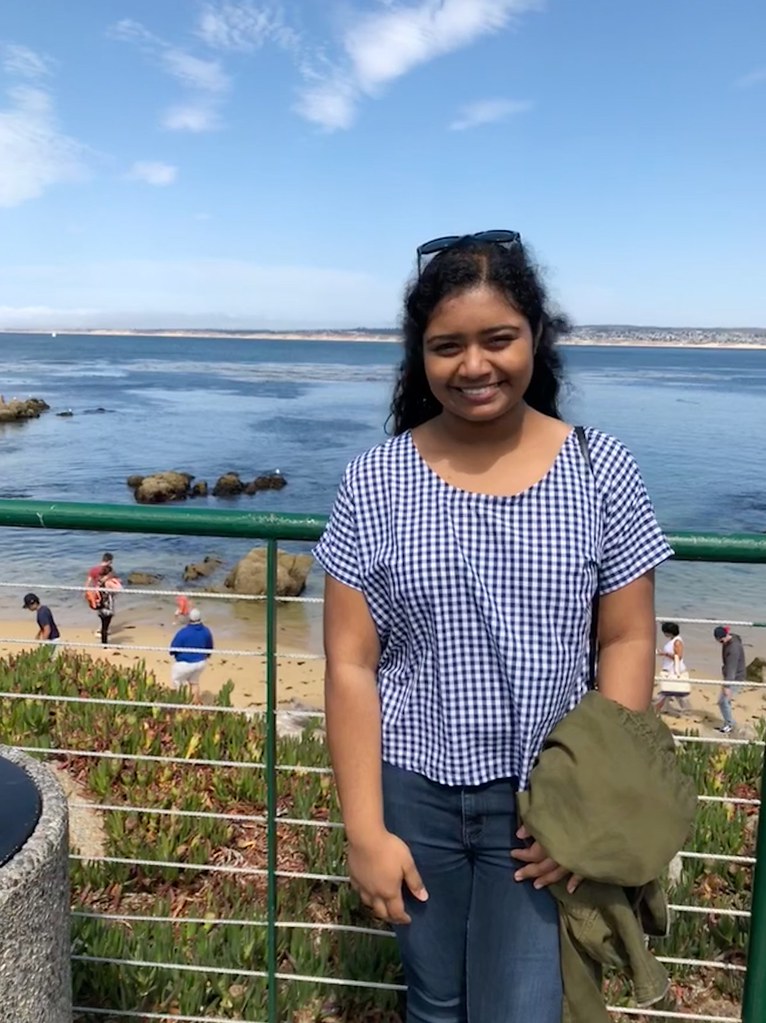 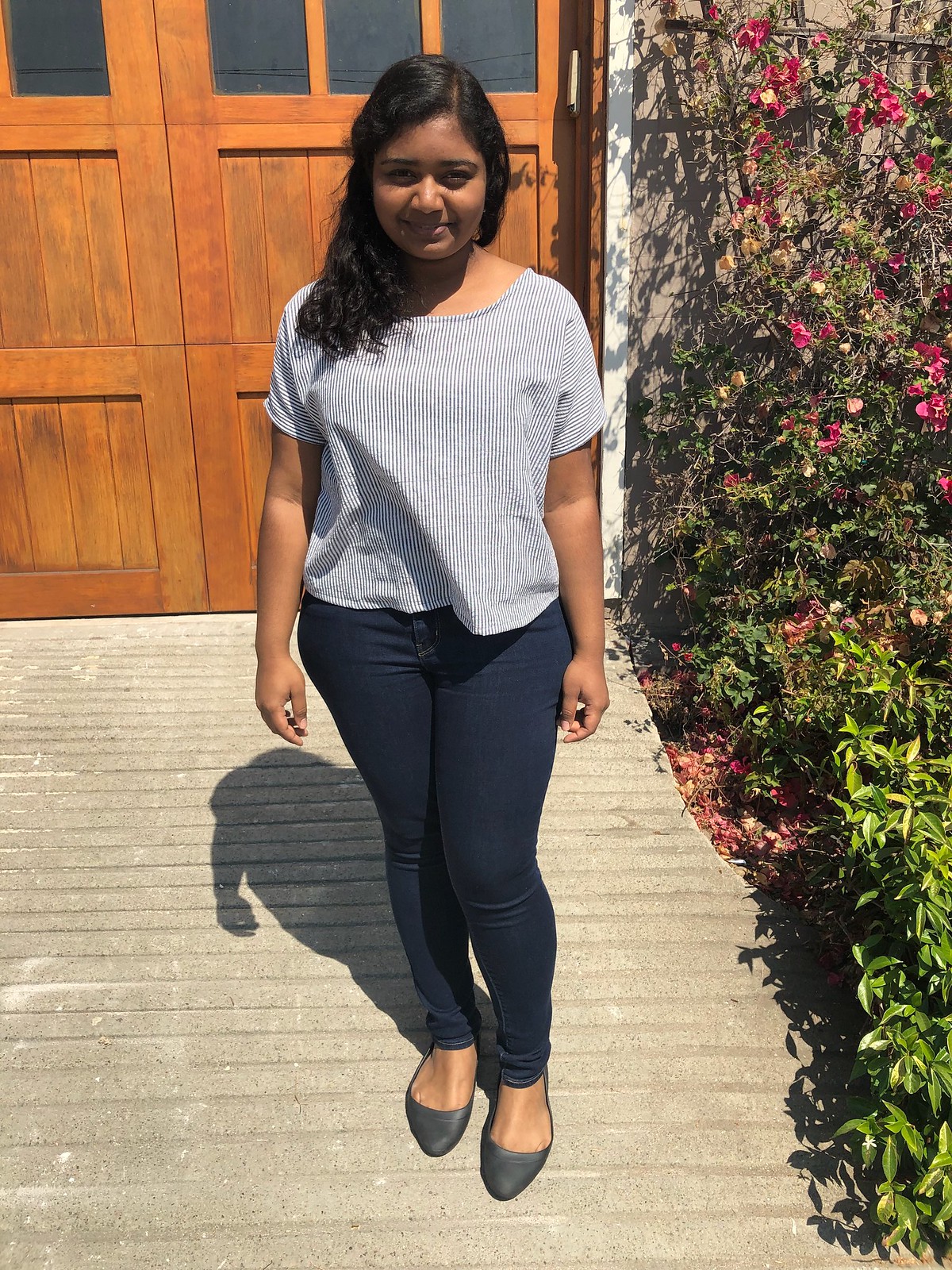 This top took just as long as the first– because when I initially put the neckline bias binding on, I sewed it on backwards! I had to rip all my seams out and reattach, which added at least an hour to my sewing time. Maybe more. Lesson learned, don’t sew when you’re tired.

The pattern for Shirt No. 1 leaves the front neckline up to you– cut it as deep or as shallow as you want. I created a scooped neckline here, and on the blue gingham top, and later realized it was too low. With a shirt this loose and drapey, leaving the neckline so low meant that the shirt slid around and sat uncomfortably under a jacket. This was more noticeable with the lighter seersucker material than with the cotton gingham, and after wearing this top out a couple of times, I vowed to leave the neckline higher next time.

I also noticed that the cut ends of the seersucker fabric frayed in the washer– a lot. Even when the edges were pinked. Mental note, try a more finished seam next time. 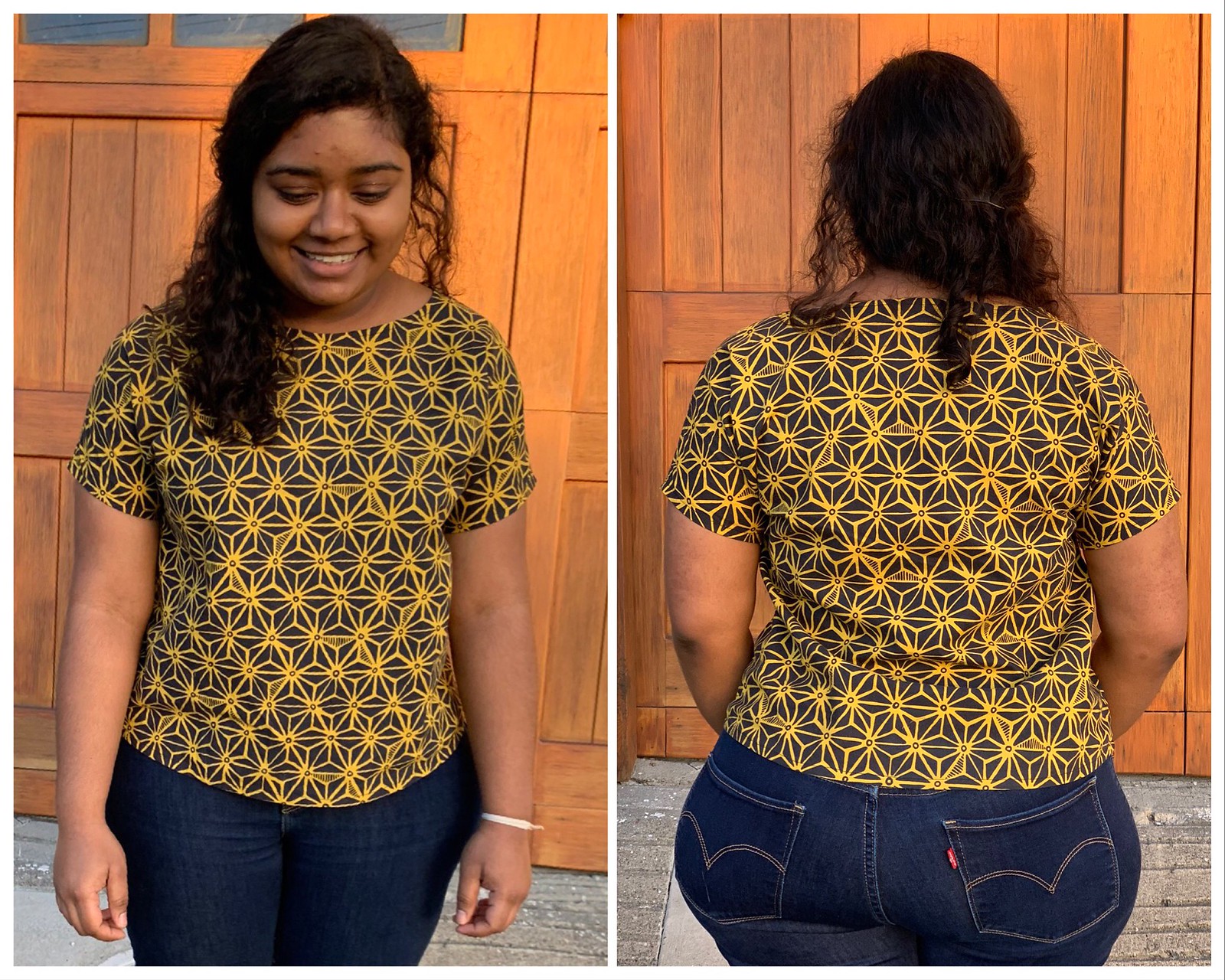 For this version of the top, I made some changes.

First, I changed the fit. I made it longer by adding 2 inches at the bottom. I also brought the side seams in to make the top more fitted. To do this, I tried on my gingham version of the top, pinned it in from the sides, and then transferred my changes to the pattern. I basically brought the sides in by an inch or two, and let the top flare out from the bust to the hips.

Second, I changed the seams. I still used bias binding for the neckline, but I knew I wanted the shoulder and side seams to be durable for many washes. So, I used a flat felled seam. This added a lot of structure and durability.

The fabric I used is a Robert Kaufman quilting cotton from the sale section at Stonemountain and Daughters. I got it for something ridiculous, like $6/yd, and it’s held up well to several washes & machine dries now. 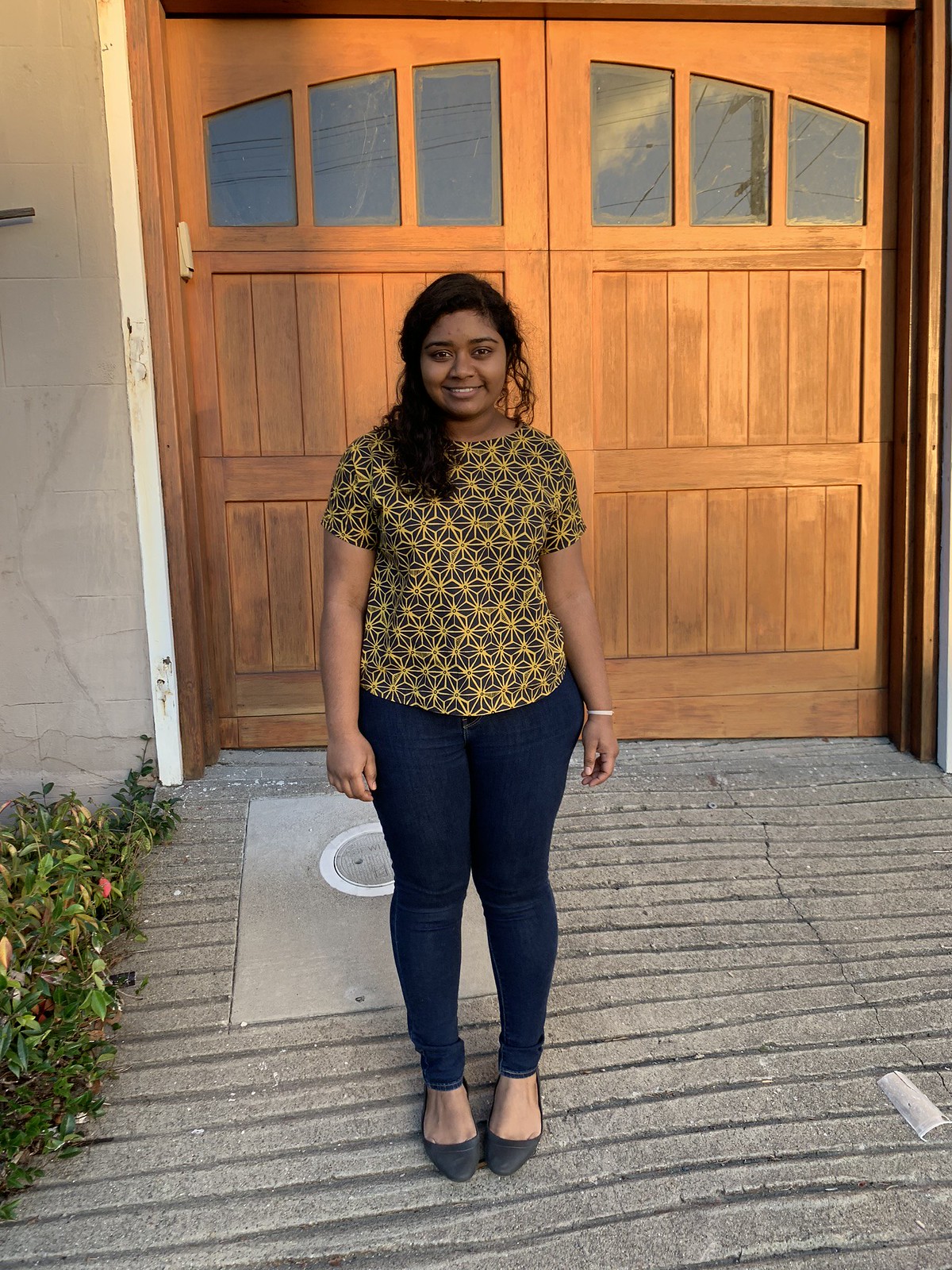 My variation doesn’t have the same drapey-boxy-minimalist feel as the other two tops, but it fits my body perfectly and pairs well with jeans. It also sits well under a jacket or a cardigan.

Shirt No. 1 is a great beginner’s pattern, and there are so many things you can change and customize about it. I’ll probably make another one or two of these this spring or summer. And when I do, I’m considering a drapey, high-neck variation in silk noil or linen, with french seams. I might make another fitted top in a seasonal cotton print fabric, too.